Murrieta: Menifee Couple Ordered to Stand Trial in the Death of their Infant Daughter 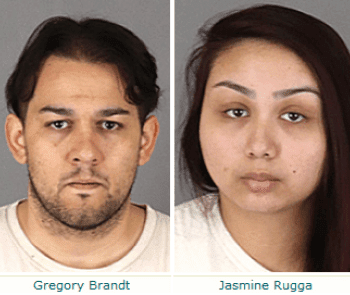 Superior Court Judge Kelly Hansen ordered Gregory Miles Brandt, 33, and Jasmine Jenae Rugga, 27 to stand trial in the death of their Infant daughter. The couple had brought their baby to the emergency room of a Temecula-area hospital because the child had stopped breathing in January.

“Evidence surfaced in the following days that lead investigators to believe foul play was involved in the infant’s death,” said Riverside Sheriff’s Sgt. Wallace Clear. The couple was arrested on March 11, at their Menifee residence following a 2 month investigation by the Menifee Police Department homicide investigators.

The judge ruled that the couple must stand trial on felony charges, along with a family friend, who allegedly tried to help cover up the crime. Brandt will be tried on charges of murder and assault on a child resulting in death. Rugga was ordered to stand trial on child endangerment.

Matthew Wade Ryan, the family friend, will be on trial for being an alleged accessory after the fact.

Brandt is being held in lieu of $1 million bail in the Indio Jail while Rugga and Wade are both free on bond. The Judge scheduled a post-preliminary hearing arraignment for Tuesday, August 13th .

Anyone with additional information regarding this investigation is encouraged to contact the Central Homicide Unit at (951) 955-2777.
[slideshow_deploy id='1574]