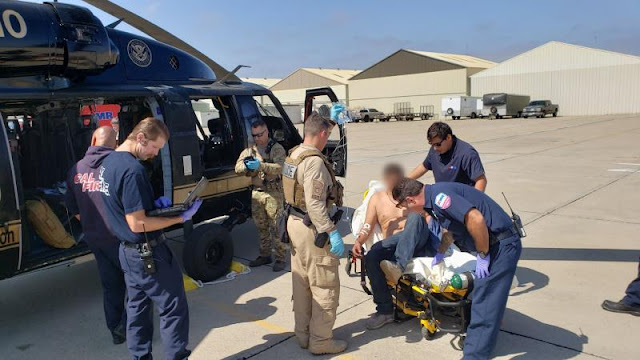 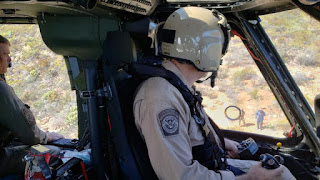 The UH-60 crew proceeded to the remote area of El Centro and located the four distressed migrants who precariously ignited a small brush fire as a signal of their location.

The UH-60 crew landed and contacted the migrants. An onboard Air & Marine Emergency Medical Technician (EMT) performed an initial assessment of one of the individuals who was unresponsive and appeared to be in advanced stages of heat stroke. The other three migrants had succumbed to the elements and were provided hydration by the crew. The UH-60 crew extinguished the small brush fire before it spread.

The aircrew coordinated with the El Centro Sector Border Patrol’s Border Search Trauma and Rescue (BORSTAR) team to transport and turn over the four migrants to them at a nearby access road. Three migrants were turned over to the BORSTAR team and the unresponsive migrants was flown to a Medical Center in Brawley, Calif., for emergency services. All four individuals were Mexican national men aged between 20 and 38-years-old.

The second rescue occurred on Wednesday at approximately 9 a.m., after a San Diego Air & Marine Branch UH-60 Black Hawk received a request from a San Diego Sheriff Department helicopter for help in locating a distressed migrant. The migrant could not be located due to adverse weather and terrain.

At around 9:45 a.m., the distressed migrant was located down a steep ridgeline in a remote area on Otay Mountain via a phone patch between the alien’s cell phone and the aircraft.

An onboard BORSTAR agent was deployed via a one-wheel landing due to the adverse terrain to assess the migrant’s condition. The distressed man was dehydrated and had sustained multiple injuries as a result of a fall. The man, a 41-year-old Mexican national, claimed to have been in the mountains for five days and without food or water for the last three days.

After being rescued off the mountain, the dehydrated man was given fluids and taken to a hospital for evaluation.
An onboard Air & Marine EMT hastily administered fluids intravenously to the man while the Black Hawk crew transported him to the Brown Field airport to awaiting San Diego Sector Border Patrol and local medical personnel. Agents took the migrant to a nearby hospital for evaluation and treatment.

“It is inherently dangerous to illegally cross the border,” said Hunter Davis, Director of Air & Marine Operations in San Diego. “Those dangers are heightened exponential in mountainous and remote areas especially during inclement weather.” 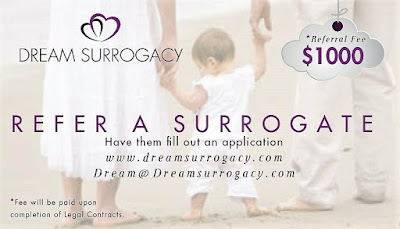 U.S. Customs and Border Protection is the unified border agency within the Department of Homeland Security charged with the management, control and protection of our nation's borders at and between official ports of entry. CBP is charged with securing the borders of the United States while enforcing hundreds of laws and facilitating lawful trade and travel.

Press Release Provided by the US Border Patrol