College Football: MSJC Survives Scare in Second Half to Remain Unbeaten against Glendale 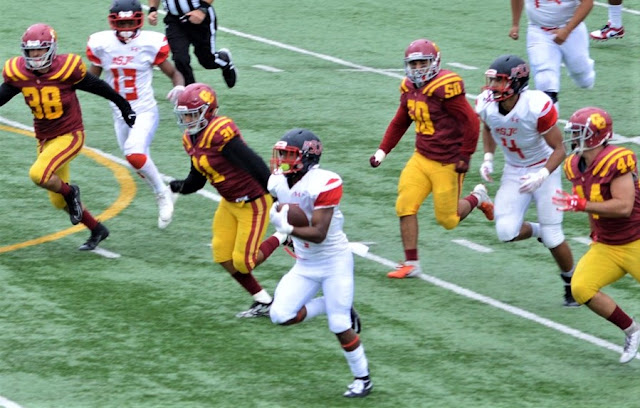 The Eagles received the opening kickoff and wasted no time getting on the board. They took just under 2 minutes to score on a Brett Virgil pass the Javier Luna took 42 yards for the TD. The extra point made it 7-0. 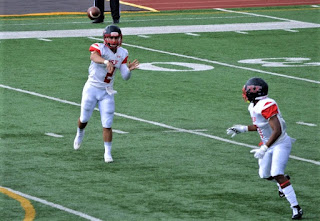 Glendale punted it back to San Jacinto. The Eagles offense marched right down the field again on a 4 yard Sherod White scoring run to make it 14-0.

Glendale was able to drive deep into MSJC territory and was set up on a 3rd and goal when Big Michael Erim intercepted a tipped pass to stop the drive. stalled on it’s next drive punting it back to Glendale.

The San Jacinto defense appeared to have their second interception of the day but it was waived off due to a pass interference call, keeping the Glendale drive alive. Glendale went for the first on 4th down just inside MSJC territory but were turned awa, turning the ball over on downs. 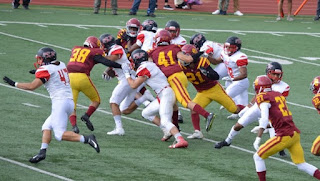 Virgil wasted no time with a spectacular run, dodging would be tacklers and setting up the MSJC offense deep in Glendale’s end. Virgil found CJ Sullivan with 3 yard TD pass to push the lead to 21-0 at the half.

Glendale got the ball to start the second half and were forced to punt. San Jacinto's Kari Oates fielded the punt and began to walk forward, as several Glendale defenders stood near, apparently thinking he called for a fair catch. He had not and after walking through the initial defenders he raced 70 yards for the TD, making it a 28-0 game.

That would be the start of a wild third quarter that would have 35 points scored. Glendale scored on the first play after the ensuing kickoff on a 63 yard TD run by Tru Fugate, making it 28-7.

MSJC was forced to punt on the next drive. A short punt set up the Glendale drive. MSJC appeared to have another interception, but it was negated by on offside penalty, Glendale took advantage of the break and scored on a 1 yard QB sneak by Nathan Eldridge, closing the score to 28-14.

Luna returned the kickoff to the Glendale 20 yard line. Virgil scored 3 plays later on a 12 yard run, pushing the lead back 35-14. Glendale took their turn at returning a kick to San Jacinto's 19 yd line. Glendale scored 4 plays later on a 2 yard Fugate TD run making it 35-21. Closing out a wild 3rd quarter.

MSJC had to punt and Glendale marched 78 yards, scoring on a 9 yard run by Elijah Washington to make it a one score game, 35-28. 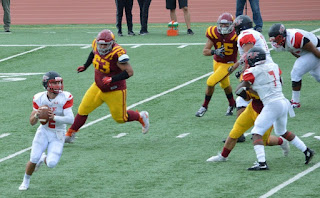 MSJC was again forced to punt the ball back to Glendale with a chance to tie. Glendale moved into MSJC territory but the drive ended on a huge sack by Kervin Jones. The MSJC offense moved into scoring position and was faced with a fourth down pass that appeared to fall incomplete.

A late flag for pass interference gave the San Jacinto offense the boast it needed and Sherod White scored on an 18 yard touchdown run. MSJC caught Glendale off guard and completed the 2 point conversion making it 43-28.

The San Jacinto defense stopped Glendale on 4th down near mid field giving the ball back to the offense with around 3 minutes left. MSJC could not gain a 1st down and decided to go for it on 4th down. The attempt was stopped by Glendale giving their offense the ball with just over 2 minutes left in the game.

On their second play, linebacker Steven Bradshaw intercepted a tipped pass giving the ball back to the offense. Brett Virgil scored 3 plays later on a 42 yard run closing out the scoring at 50-28.