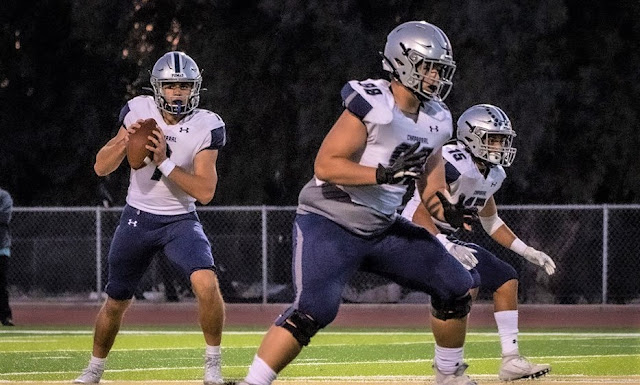 Chaparral's high scoring offense got off to a uncharacteristically slow start at the beginning of the first quarter. The Titans limited the Pumas to one score in the first quarter a 5 yard rushing touchdown by Matt Majel.

On Tahquitz first drive of the second quarter, Chaparral defensive back Jaheil Blue-Smith decided to take matters into his own hands. The senior corner back came up with an interception on a deep pass as he tip toed the sideline.

The play ignited the Chaparral offense which capped the drive with a Brock White 16 yard rushing touchdown. Joshua Swift picked up the ensuing onside kick for the Pumas. White made quick work of the drive and hit Immanuel Lashley along the sideline for a 33 yard touchdown pass. Both teams exchanged possessions before heading into the half with Chaparral up 20-0.

The Pumas kicked off to the Titans to start the third quarter. The Puma defense held strong and forced a punt after three plays. The Titan punter mishandled the snap and the Pumas were able to force a safety.

The Pumas received the ensuing kickoff and drove to the Titans 2 yard line before White ran in for the score. The Pumas kicked off to the Titans and Tahquitz mishandled the ball. The Pumas Koby Holland was quick to pounce on the ball for the recovery.

The possession led to a 15 yard touchdown by Troy Hernandez. With the Pumas leading 36-0 the Titans leaned heavily on the pass. That is until Puma defensive back Gavin Ellison came up with an acrobatic interception at the Titans 29 yard line.

With Chaparral leading 36-0 the fourth quarter started with a running clock. Quarterback Eli Bertran drove Chaparral deep into Tahquitz territory before opting for the 33 yard field goal by Mikey Terriquez. On Tahquitz’s final drive of the game they drove to the Chaparral 2 yard line where Travis Booth ran in for the score. The clock ran out with the Pumas on Offense and the final score was 39-6.

The Titans (3-2) will play the West Valley Mustangs in a Mountain Pass battle, on Friday, October 4. The Mustangs (2-3) go into the battle after their 58-42 non-league loss to Chaffey.