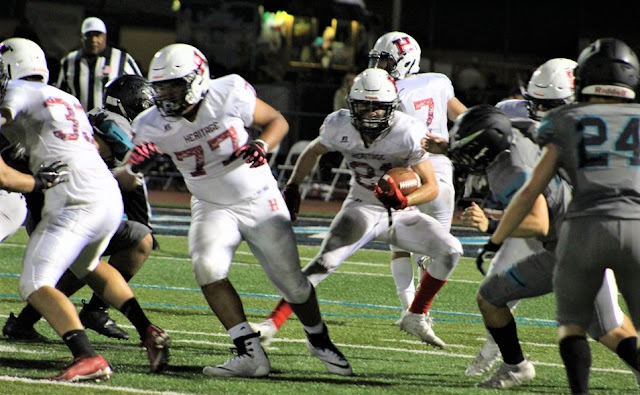 The Patriots Face Off Against Rival Elsinore Next Week 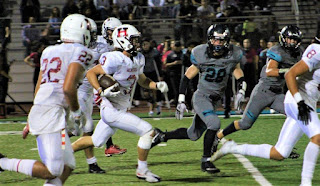 Heritage played it's topical game Thursday nigh as the Patriots controlled the clock and ground out a victory over Big VIII Santiago, 14-7. It was a tough defensive contest for both teams.

Heritage (3-2) scored their first touchdown in the second quarter \. Sophomore quarterback Kyle Basham tossed a 26 yard TD pass to receiver Dominic Cyr which gave the Patriots a 7-0 lead. That would be the only scoring for both teams until the fourth quarter. 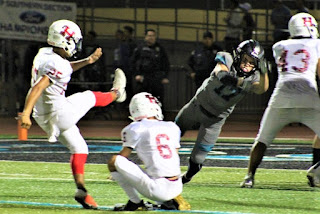 Defense dominated on both sides of the ball. Kenny Teter and defensive end Dominic Cyr recovered fumbles for Heritage and Noah Abouelrous for the Sharks.

As Heritage used its familiar ball-control approach to grind out yards,running back Kenny Teter busted loose from the pack with a 41 yard run for the Patriots second score of the game. Dominic Chacon made his second PAT of the game to give Heritage a 14-0 lead. Teter gained 193 yardson the ground Thursday.

Santiago came roaring back. Stuck deep in their own territory, Shark quarterback Brandon Arambula completed four passes for 70 yards to drive his team into the Patriot red zone. Running back Calin Marshall scored on a 8-yard touchdown run.