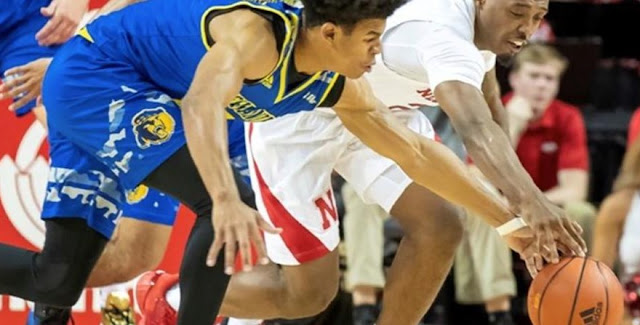 For the first time since 1980, Big Ten Nebraska loses its home opener

For the second time in three years, the UC Riverside Men's Basketball Team (1-0) opened its season on the road with a big win over a power five conference team. Tuesday night, the Highlanders roasted the Cornhuskers (0-1) from Nebraska 66-47, marking the program's largest margin of victory on opening night against a DI opponent, and the first time the Huskers have lost their home opener since 1980.

UCR led by four points at the half before erupting for a 34-19 second period where the Highlanders held the Big Ten affiliate Huskers to a shooting mark of 23.1 percent from the field.

"When we reassessed our team over the summer, we knew we had to make huge strides on defense and in rebounding the ball, and I thought tonight those two areas were key in getting the win here in Nebraska," head coach David Patrick said. "Our guys have bought into our new defensive system, they followed the scouting report to a 'T', and we were more physical than them for most of the night.

UC Riverside got out to slow start after making the first field goal of the contest, falling behind 16-7 in the first seven minutes but bounced bask with a sense of urgency, going on a 9-4 run to cut the lead 20-16. A barrage of threes by sophomores Dragan Elkaz and DJ McDonald, as well as junior George Willborn III, would see the Highlanders take their first lead of the game since early on and go into the locker rooms up 32-28.

The second half was all Highlanders, with the team growing its lead from four to 18 in the first 10 minutes of the period behind great defense and efficient shooting. UCR was red hot, shooting 41.8 percent from the field, 48 percent from beyond the arc, and 88.9 percent from the free-throw line.

On the opposite end, the visitor held its host Huskers to a dismal 29.1 from the field, 23.1 from three, and 47.4 from the stripe. This strong performance on both ends of the floor in combination with a dominant 49-29 win in the rebound battle allowed UCR to hold on throughout the final minutes and take the first ever meeting between the two teams 66-47.

The biggest story on the individual end was Willborn III, who notched a huge double-double with 13 points and 18 rebounds in his Highlander debut. His 14 defensive rebounds land him in a three-way tie for most all-time at UCR, joining Taylor Johns (2015) and Kevin Bradshaw (2011). He also added three steals on the evening.

"I was trying to be aggressive on the boards tonight. If the ball was in the air and I was in the vicinity, I was going to go after it," Willborn III said. "Offensively we did a great job of spacing out, we had some great shooters in the corners, [McRae] did his thing today, and everybody was doing their part so I did my part and scored when I needed to."

Four Highlanders landed in double figures, with McDonald leading all scorers with 15 points off the bench thanks to three second-half triples and an efficient four-for-six performance. Junior Dominick Pickett and Elkaz notched 10 and 14, respectively, and each got the start. Together, those four would combine for 52 of the team's 66 points on 17-of-33 shooting.

McRae earned the start in the middle and created havoc all night forcing Huskers to change their shots and coming up with nine points and six boards, while sophomore Zac Watson grabbed 12 rebounds off the bench. Freshman Zyon Pullin looked strong in his college debut, bringing the ball up the floor for the majority of the team's possessions and pacing the offense. The Highlanders found success deep in the bench despite, with a few key players missing Tuesday's match-up.

"Our motto this year is 'United, Competitive, Resilient' and the resiliency part means the next guy has to be able to step up no matter the circumstance," Patrick said. "With the additions to our roster and the growth of the guys who were freshmen and are now sophomores, we have a lot fo different weapons we can attack you with."