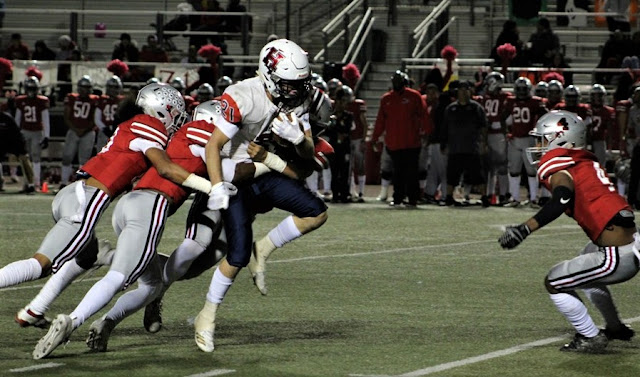 Rancho Verde improved it's final regular season record to 9-1 as the Mustangs crushed Heritage Thursday night. The Patriots fell to 7-3 as they suffered their worst loss of the season 44-0. Heritage had not been defeated since September 6th when they fell to Cajon 24-7. 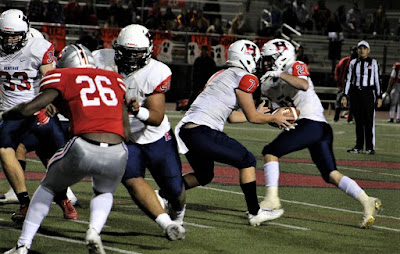 Rancho Verde clinched its second consecutive Ivy League title and secured a home game in the opening round of the CIF Division 2 playoffs that start next week. The Mustang defense is playing their best ball of the season, holding the Patriot's ball-control ground offense to just 74 yards rushing. A season low.

The Mustangs were lead by running back Jordan Jefferson. The senior ran for 181-yards and scored five-touchdowns against a very tough Heritage defense. It all started in the the first quarter when Jefferson broke loose with a 50 yard run for his first TD.

Jefferson added another 6 yard scoring run to put Rancho Verde up 14-0 in the first quarter. Jefferson made it 21-0 at the half when he slipped into the endzone with his third touchdown run with 7 minutes to play in the second quarter.

It was Luis Santiago's time to shine for Rancho Verde in the third quarter. The senior nailed a 20 yard field goal to make it 24-0 Mustangs. He also made every extra point attempt of the night.

It was Jefferson's show once again as he scored his fourth and then fifth touchdowns in the final 4 minutes of the third quarter on runs of 37 and 4 yards. Rancho Verde led 38-0 when the Mustangs scored their final TD with just under a minute left in the game.

Rancho Verde coach Pete Duffy was all smiles as he praised his senior running back after the game “ Jordan is special. When he’s feeling it like he was in that first half, it’s fun to watch.”

Rancho Verde will play in the Division 1-2 CIF Southern Section Playoffs. Heritage is in Division 3. Both teams are looking forward to the opening round of the playoffs.